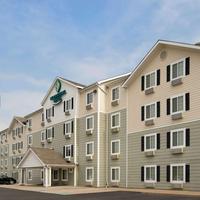 “Nothing noise was awful”
“Staff is nice and the location is ok and it's so quite. And shopping stores is close and walking distance.”
“We arrived after 10 pm after driving for 24 hours straight. We checked in and opened the room door and immediately was overwhelmed by the smell of mildew. We thought, just turn on the ac and the smell would subside, wrong went in to the bathroom and there was mold on the ceiling and walls (photos available) the bathroom fan was not working. First thing in the morning we notified the staff about the mold and the fan and they sent a "maintenance" guy to take care of it. He was unable to remove a screw to replace the motor. Let me repeat this, he was unable to remove a screw! So he tells us that he would have to get the senior "maintenance" person from another property, (because he couldn't remove a screw). As night approached, still waiting for the better maintenance guy, the room above us had a child(ren) running around the room and jumping off the furniture. At around 11pm I went to the lobby to complain and was told they would take care of it. (They did not) for the next 4 nights we called and went to the lobby to complain and it just continued. Oh and before I forget, the carpet was so filthy that had to cover it with blankets just so our small dogs could walk on the floor. 5 days into our 21 day reservation, the regional manager knocks on the door to take a look at the fan and decides he would move us to another room. We pack everything up and wait. He returns to the room and says he has a room and we could move as soon as house keeping finished cleaning the room. We told him we had an appointment with our realtor. He says to hurry because house keeping would be leaving at 3pm. We returned around 1:30pm and was told that the room had be rented but would be available the next day. That night the noise from upstairs was so bad that at 11pm we loaded up and moved out.”
“The young black lady at the front desk is awesome. Great! Customer service and always has a smile as she does her job very well. The convenience of the appliances in the room and having rooms that are handicap equipped. Having a laundry room in the hotel for the guests is Great! as well.”
“Price was good, check in staff was nice.”