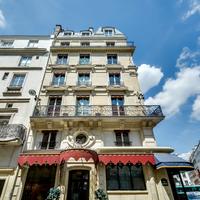 “Private traditional hotel with eccentric themed decor (I was in the Offenbach Room) well-placed opposite Pigalle metro and below Montmartre.”