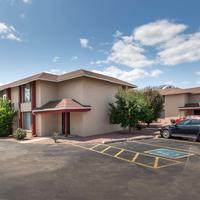 “The staff are always friendly and very willing to help if needed. The pool is nice and big and the hot tub is great!”
“The pools and slides are the best when you have younger kids. Hours of entertainment and exhausted kids afterwards - definitely a plus when travelling for family stuff.”
“The staff provided us a great room location. The live music was entertaining at their outside tiki bar.”
“Comfortable rooms, convenient, nice breakfast buffet - the covered pool in the atrium was great. Easy ride to the airport.”