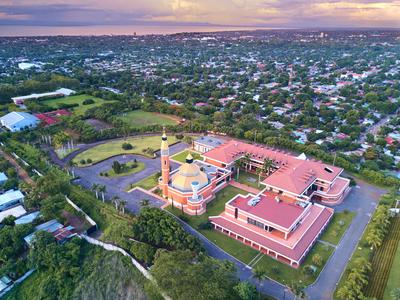 Miinukset: "None of the USB outlets were working in isle 7 A-C"

Miinukset: "Flying is no thrill now."

Plussat: "The entertainment options was awesome used the on board wifi and the flight cruised by"
Miinukset: "Boarding and deplaning is always such a hassle"

Plussat: "Crew was nice and comfort was okay."
Miinukset: "There was no internet most of the flight it only worked for the first 20-30 minutes of the flight then they tried resetting it but it didn’t work for the rest of the flight."

Miinukset: "just the food options were not that good. all other things were ok."

Miinukset: "I’m never ever in my life flying with American Airlines Again. I want my money back honestly. I’ve had 4 flights with AA. 2 to get to Columbia and 2 to get back to Washington. 3-4 HAD ISSUES OR WAS WAY LATE. Unexceptional"

Plussat: "The crew and the service"
Miinukset: "The seat I have had 13C for the last 3 flights to and from Miami on this plane has the controller broken where it does not stay in place and pops out. This time a soda was spilt on the seat, and the steward had to change the seat out for a clean and dry one.this plane has no entertainment displays other than the general cabin ones and this one is out of focus and the colors are blurred."

Plussat: "The flight crew was quite lovely."
Miinukset: "People all over the coach section were complaining about not being able to sit together. Families with babies, couples, even ours (though the kids are old enough for me not to be truly worried as some were). Somehow reservations seems to have messed up an entire flight. We gave up trying to fix it for fear they would make it worse. Then the woman at the gate tried to get folks to volunteer to give up their seats on an overbooked flight. But she was screaming at us. Unbelievably unpleasant to be yelled at over and over again and told we could lose our seats. The poor weather likely caused flights to be rerouted into PHL so our flight out to SFO ended up 1/3 empty. FABULOUS. But the gate experience was horrible and the legroom, had it been a full flight, was miserable. I'm in search of an airline with a humane approach."

Plussat: "On time departure, early arrival. Comfortable journey. Our pilot was a woman! Go girl power!"
Miinukset: "The WiFi did not work. You couldn’t download the American Airlines app. The crew forgot to give me my complimentary drink. After attempting for 10 minutes, Gave up."

Miinukset: "The flight was delayed and then the airport in Philadelphia "wasn't aware" that we were coming to it took forever to get off the plane. I would have missed my next flight if they didn't wait for us. Also I couldn't check in online beforehand, which was frustrating. Also I waited in line at the British Airways desk to check in and it was a long line. When I finally got to the front I was told I had to check in at the American Airlines desk and I wish I had been told that earlier. One staff member was rude when I asked him to repeat the food options."

Miinukset: "The plane was a little too hot."

Plussat: "An elderly lady sitting next to me with a broken arm.....was approached by the flight attendant and the flight attendant was so considerate that she took the lady to the empty seat in first class!!! I noticed this kind gesture and noted it to the flight attendant. She told me sometimes folks get upset asking why they did not get the upgrade! It amazes me....I always think if that were my mother how would I want to be treated!!! CUDOS to this Flight attendant....Thank you AA for making this gesture and God Bless you all!"
Miinukset: "Surprise....American Airlines no longer food nor one bag free! Well if you can stomach the not even a snack nor one bag...then Fly AA so not so bad after all. But Gate agents, baggage handlers, pilots and flight attendants take away any negatives whatsoever! Great work AA."

Plussat: "It had 1980 common program and not an in seat outdated"

Plussat: "It was worth while upgrading to premium plus for the first time I was actually comfortable flying the crew is always kind and caring and the food was. Better than usual. Unfortunately Heathrow employees board handicapped people and the are horrible. They didn't come to board us until the plane was 75 percent boarded which is just unacceptable for a wheelchair user who cannot stand. BA had to stop boarding to get us aboard the plane with the help of BA crew who are great."

Plussat: "The amount of things to keep you entertained for the long flight"
Miinukset: "I had to have my seat up the entire route so that made a very uncomfortable flight was never able to really rest"

Plussat: "The staff was very helpful"
Miinukset: "I did not like the fact that, I was ask to help a non English person, whom spoke French find their way to the departure area from check in. I could not understand their broken English. That I feel is the job of the person or staff trying to check them in."

Plussat: "My throat was sore and stewardess was able to give me water while I attempted to take cold flu pills"

Plussat: "The fact that the plane landed."
Miinukset: "American Airlines is running neck and neck with United, competing for the world’s worst airline. They have crammed so many seats onto their planes that I’m surprised it isn’t a health hazard. I was in an aisle seat and every time I started to fall asleep, someone going down the aisle slammed into me, making any sort of rest impossible. And the flight attendants had the typical U.S. flight attendant perma-rage, of course. I feel sorry for them, underpaid and overworked, but always p***ed off. Anerican Airlines needs to look at Emirates and other non-U.S. carriers to learn how to treat their passengers."

Plussat: "It was a fabulous ride, with personal entertainment centers, fast service -"
Miinukset: "unfortunately just one exit , so took forever to exit the plane but otherwise great."

Miinukset: "Terrible attitude of Kay (Kathy) our flight attendant. Seemed like she didn’t want to be at work today. Said “thank you” and no response— didn’t talk at all. Seemed overworked?? No movie- no monitors? This was not First Class Service and we were very disappointed."

Miinukset: "The cabin was extremely hot, taxi time and time sitting in the plane took way to long. Air flow was extremely limited"

Plussat: "Seats had good leg room, and the current movies were free (unlike on the United flight I took a short while ago). Boarding was quick."

Plussat: "The crew and captain were lovely and communicative."
Miinukset: "Our plane was very old and there were engine problems that kept us grounded for hours at JFK. I was terrified the entire time we were in the air that something might go wrong. Additionally, the air conditioner worked very poorly."

Plussat: "All good, excellent crew and on time."
Miinukset: "The food, of coarse!"

Plussat: "Experienced a 4.5 hr delay to the destination. Family had to pick up grandson (Ibooked trip for him) after midnight in L.A. 2 hour flight delay coming back which pick up had to be re-arranged again by family. Family member flew to us next day via United without any issues. Dont book through this site or use American Airlines!!!"
Miinukset: "See above"

Plussat: "The Check In Agents were so kind and helpful especially when they found out we were having a rough time with a family situation.....So blessed to have those two ladies working for such a magnificent airlines"
Miinukset: "you have become like the rest of the wolf pack......charges on everything! Try become like Pan Am of days of old!"

Miinukset: "We were inside a plane for almost 3 hours due to unavable pilot. They got us out and then back in again, all in all we wasted six hours until the flight was cancelled."

Plussat: "Didn't have to turn around & come back like other flight. Still got to my destination in time."
Miinukset: "hour delay because too hot to land in El Paso, only then did they need to fuel the plane, then realized plane was overweight, made me wonder if making it up or really hadn't thought it out."

Miinukset: "The stewardesses repeatedly rammed their cart into my seat. They were so rude. it was appalling. I will never fly american airlines again"

Plussat: "Entertainment, service, pilot and his crew were great."
Miinukset: "Food was not good. Can do better. As vegetarian there are lots of good places they can order the food from."

Miinukset: "I bought Japan Air but it was American air.. I'm not buy tickets any more!!"

Plussat: "I was traveling with an infant and the staff was so helpful. I will definitely fly AA again."

Miinukset: "The seat was extremely comfortable."

Plussat: "Got home safely (eventually)"
Miinukset: "Left 3.5 hours late. Promised a connection the following morning and a hotel. Arrived at SFO only to be told that they would not pay for the hotel (or make arrangements) as the delay was weather related (since when is trying to leave BEFORE a typhoon hits and being LATE a weather related issue). They gave me the option of after a 13 hour flight at 11:30pm walking over to find AA staff in another terminal to argue for payment. I was too tired. After 1 million miles on AA I will avoid them now."

Plussat: "Easy boarding"
Miinukset: "Strange kid sitting next to me"