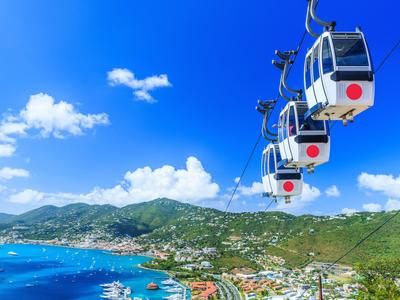 Plussat: "I was lucky enough not to be put into a middle seat or next to a stranger during this pandemic."
Miinukset: "No social distancing and no enforcement of wearing a mask properly. Wearing one on your chin or half of your mouth with your nose hanging out needs to be corrected. Empty seats should be utilized for social distancing regardless of fare. First class and the back half of the planes were practically empty while everyone was in the center. We should have been allowed to spread out."

Plussat: "NOTHING"
Miinukset: "They could start by not allowing a non-compliant passenger ON THE PLANE. When he was already not compliant in the damn terminal. (Dude didn’t wanna wear a mask) forced the captain to circle back and screw our timing for our connecting flight. You might say, how can we blame AA, well, because they chose to allow him to become a problem and then exasperated it by allowing him in the damn door of the plane. Now we got stuck in Charlotte for the night. Nothing like being late for your Grandma’s funeral. Pathetic AA! PATHETIC!"

Miinukset: "Everything was on time great"

Plussat: "Boarding"
Miinukset: "Better seats, the main cabin extra seats were just like the other main cabin seats. One particular stewardess was very rude to all the passengers, while the steward Jeffery was very nice and friendly."

Plussat: "That the flight attendant was really helpful"
Miinukset: "If the flight would have been on time"

Plussat: "Good range of entertainment, comfortable seats."
Miinukset: "Some dinner choices had become unavailable by the time I ordered."

Plussat: "crew were late, boarding was impacted, flight was delayed an hour"

Miinukset: "It's a long time in an ever smaller seat"

Plussat: "Getting off. Entertainment system."
Miinukset: "The food. Working toilets. 10 abreast seating is too tight on 777. Avoid."

Plussat: "Seat 5A was great"

Miinukset: "no individual tv’s. The best was the food, noquis were excellent"

Plussat: "Considering it was only a 2.5 hour flight, the snack was fairly good."

Plussat: "The crew were great, entertainment was good."
Miinukset: "After sitting on the plane for an hour they found a problem and so we had to deboard and wait for another plane. Obviously better than taking a less than optimum plane but added a lot of waiting time to an already long day. Not great that on a 6 hour flight we had to buy food."

Plussat: "No issues - which is what I expect"
Miinukset: "USB chargers on seats"

Plussat: "It left on time and arrived on time"
Miinukset: "Service, comfort and food as I would rate these below 0 if there was that option."

Miinukset: "Short flight there was no entertainment but that’s ok"

Miinukset: "Too bad you paid$$$$ and they give you pretzels"

Miinukset: "They lost my luggage. They did not allow me to take her whit me in the plane because i did not fit a suitcase that always travel on top because is small suitcase terrible I will never travel again with amercan airlines"

Plussat: "I liked the room."
Miinukset: "There was no entertainment. Could not get seats together."

Plussat: "The plane was not busy so services took about 5 minutes, everyone had 2 seats minimum and generally quiet. Had it been busy, it would have been different in that seats were not very wide, aisles very small, if the seat in front reclines and you don't, you can't see your screen and not a lot of space in general."
Miinukset: "If you want to select your seat, be prepared to pay £175 per flight. This is ridiculous! Second meal was a very bare bbq beef pie or sweet potato pie... On their own with nothing else and it arrived 30 minutes before we landed so very rushed. On a 9.5hr flight the 2nd meal needed to be an actual meal and come sooner than it did."

Plussat: "Arrived ahead of the scheduled time"
Miinukset: "Plane was less than half full yet the crew appeared pressured .... one crew member didn’t wait for me to complete my request and she brought me eat phones yet I wanted to ask for water to drink! Seats don’t recline much ...."

Plussat: "Checking in and boarding the plane went fast and smoothly. The crew was very kind and friendly."
Miinukset: "I wish American offered more vegan and wheat/ gluten free options, as well as herbal tea options. I was determined to sleep during this flight, but I was hoping this plane would have the TV behind the chair. I enjoy watching the live map as we’re flying."

Plussat: "The plane was late but from that point everything was fine."
Miinukset: "Nothing"

Miinukset: "First flight TUS to DFW was delayed by 3 hours causeing us to mist all the remaining flights. Had to scramble to find other flights DFW to LHR and LHR to DUB. We arrived at our destination 10 hours. No reason for the delay was given. Lousey service on AA."

Miinukset: "The flight was delayed. The food was not great. There is not a lot of space in these planes, and it was a long flight. There is no power supply."

Plussat: "Crew was very friendly"
Miinukset: "Food was so bad The seats were so cramped"

Plussat: "It got me here."
Miinukset: "Apparently codeshare purchases are non upgradable, so my airline status was irrelevant."

Plussat: "I had a connection flight to JFK I came before the time about 15 min and crew saw me but she told me, sorry someone took your seats I lost around 4000$. This happened at Dallas airport."

Plussat: "Thanks, we had a very good experience, Everything was just fine."

Miinukset: "There was a high school sports team that were very rowdy and nosiy on this red eye flight. The flight crew made them sit down (as they kept getting up and turning around) but did nothing to try and keep them quiet. I was exhausted and had been flying for 24 hours already and was kept awake and annoyed by this group. No drink or snack service was provided becasue it was a red eye flight but I was kept awake by the rowdy kids and could have really used it!"

Miinukset: "3 planes all with mechanical issues... numerous people left stranded, the whole thing was a nightmare. Finally got home around 1 00 AM. But the worst part was the gate agents I literally felt like I was disrupting their day! Email sent to American."

Miinukset: "My flight was not only delayed by two hours, it was also cancelled at the time of departure. The weather was clear, no reports or reasons as to why flight was cancelled. We had to rebook another flight to our destination at another airport 5hours away, the next day, no reimbursement or upgrade for travel delays"