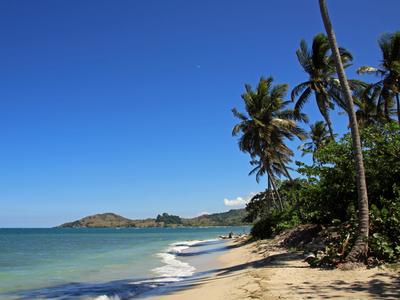 Plussat: "Crew was great. We purchased economy plus and it was a good amount of leg room."
Miinukset: "The food options for kids were kind of lacking."

Plussat: "Flight was comfortable."
Miinukset: "The check in process was a nightmare at Amsterdam airport. Partly due to the not being able to check bag straight through, multiple visits to counters, long lines for dropping off bag, and in ability to check in on line or on app from either Lufthansa or United. Each site said visit the other site."

Plussat: "Friendliness of crew."
Miinukset: "Seating on United sucks. Seats are not comfortable and don't recline to the degree that Deltas does for standard cabin. Boarding for both my united flights has always been delayed. they are never on time. Ill go back with Delta and pay a little extra for the comfort and timeliness."

Miinukset: "The different class of seating was silly to me everyone was at the back of the plane open seats every where but you had to sit in assigned seat"

Plussat: "The crew brought us water when we had engine trouble and couldn’t get off the plane while we waited for maintenance to fix the issue"
Miinukset: "Could of told us to get off the flight so we didn’t have to wait an hour while the plane was being fixed."

Plussat: "Good crew"
Miinukset: "This flight had no snacks or drinks and was also delayed what else is there to say."

Plussat: "The seat was very comfortable"
Miinukset: "Wasn't expecting to have to run all the entertainment through my mobile device. I'd that's what you're gonna do, we're should get free wi-fi"

Plussat: "Good boarding process, pleasent staff"
Miinukset: "We upgraded to the economy plus. I thought it was still tight in with width and I m a small guy. The plane seemed old as the in seat screen was smaller than my phone. My wifte’s seat actually came apart. No charging ports for mobile devices."

Plussat: "Stroopwaffles, TVs"
Miinukset: "They made me check my bag which was ridiculous. It’s been on numerous flights and was smaller than any other bag in the overhead bins"

Plussat: "The flight crew was very welcoming and positive. They were attentive and ensures that every one had headsets, blanckets etc for the 8.5 hour flight."
Miinukset: "Lacking food healthy food options. No salads or light bites available. The warm food that they did have was terrible and very salty. I wish their in-flight entertainment was not on our own devices because updates to the app are required which you wouldnt know unless you were on the plane and connected to their wifi."

Plussat: "The crew was very friendly on board. The gate crew were a little curt, but it was a full flight and they were really trying to get everyone on board quickly so I can't be too upset about that."
Miinukset: "Few entertainment options - direct TV unavailable for about half the flight, WiFi also unavailable for the same."

Plussat: "They accommodated us by putting our seats together. I really appreciated that."

Plussat: "Food was great!"
Miinukset: "Drinks took a while to receive after takeoff."

Plussat: "The transportation..."
Miinukset: "There's absolutely no leg room it's the smallest amount of room I have ever experienced on a plane - even the first class is eh - mediocre at best. I am slim and fit and I had very little to no room. Consider someone overweight and they would have to buy 2 seats... united is definitely not my favorite airline..."

Plussat: "The flight from Frankfurt to Chicago arrived late, had to collect bags and clear customs which delayed transfer, had to go from one end of the airport to the other on a train which operated very slow which delayed transfer, had to then clear TSA security checks which were very slow and again delayed transfer. Moving at the max speed we were capable of, we arrived at the opposite end of the airport too late to board and were left behind. United was not very sympathetic, although provided ticket for next morning flight. The entire experience was very disappointing following what was a decent tour of Italy."

Miinukset: "I am pregnant and took a 12-hour flight. The flight crew did not provide me with food for 11 hours of that flight. When I asked the flight attendants for food they told me they had none, and it was my fault I didn't bring anything to eat. then I saw them handing out food to business class. I understand that I did not shell out the class to fly business class, but it's not okay to not feed a pregnant woman. Additionally, when I was flying form you were not allowed t bring water onto the plane. The flight attendants only provided me one small water bottle an two small cups of water. I asked for more but they said no :( I will never fly United again"

Plussat: "I like the United app for ease of checkin"
Miinukset: "Flying itself is a terrible experience. Cramped seats, food is nonexistent, no wifi"

Plussat: "I liked the in flight entertainment offered at not extra charge. This was probably the best thing about the whole experience."
Miinukset: "I do not like this assigned seating thing. Most people wanted to move around. And with assigned seating boarding takes longer because you have people coming in all over the plain instead of filling form back to front. Just takes too long."

Plussat: "nothing"
Miinukset: "i will not arrive at my destination until 4:03 AM. yuck."

Plussat: "Typical intercontinental flight in coach. Plenty of movies to watch, bin space and comfortable enough seats."
Miinukset: "I have a severe food allergy and despite requesting and confirming my special meal multiple times I was only offered a banana for the entire trip."

Plussat: "Crew were friendly and helpful"
Miinukset: "Seats are very tight. Entertainment depends on bringing your own ipad or laptop and using the United system. Movies tended to be oldies. Food is 10 pretzels. Count them."

Plussat: "I like that we landed."
Miinukset: "This box seems too small to fit it all in. It's United - underwhelmed as usual."

Plussat: "The at the entrance new service it was a good experience for me. I have physical problems and that service was an amazing relief for me. Thanks"
Miinukset: "Everything was good."

Miinukset: "Was given a seat in the last row of the plane, which didn't recline. There was not enough room for my carryon cuggage and I had the lowest priority boarding. The option to upgrade was $99 each way"

Miinukset: "The seats were not comfortable. The special meal requested was not good."

Plussat: "I did not like the plane ride. There were way to many things to comment on. Most importantly everyone of my.flights was delayed."

Plussat: "No surprises."
Miinukset: "In first, the FA said they don't do hot nuts anymore due to budget cuts, and when I stood up to stretch, she told me I had to return to my cabin. It took three tries to get her to understand that I was standing next to my seat. budget cuts? During a time of record profits?"

Plussat: "Made it to Denver."
Miinukset: "Agents were not communicative with boarding passengers. Flight was delayed substantially."

Plussat: "Very nice flight. Especially since it was 10 hours. The staff brought water around as an extra which was great to keep us hydrated. Plus a decent lunch ice team and snacks. Comfortable plane."

Plussat: "It was quicker than expected."
Miinukset: "The staff was somewhat rude to other passengers when boarding."

Plussat: "I liked temperature!"
Miinukset: "My flight was delayed 3 times which led me to being 1.5 hours late to my meeting. We weren't told there was going to be a delay until we lined up to start boarding!"

Plussat: "The inflight snack was a waffle of sorts, very delicious. Boarding was fast and simple"
Miinukset: "Didn't realize I couldn't bring a rolling carry on, most of the flight had to check their bag at the gate. The steward was weird, he kept hitting on the guy in front of me, which isn't a big deal except he came by frequently and only serviced that one passenger."

Plussat: "Love the free tv/movies with the United App. That was great!"